It probably felt like a punch in the gut. More on that in a minute, though.

This is the fifty-fourth straight post I’ve written during my time of reading through the New Testament in 90 days. What started as a plan to post a couple of times a week has become a summer of posting once every day.

Since my first post on June 1, 2012, this blog has reached, for the first time, a global audience. I only praise God for whomever has read this. By the grace of God, people in Pakistan, Columbia, the Philippines, Indonesia, Britain, Canada, Australia, Iceland, Uganda, and many other places in the world, have found their way to this site. If you are one of those, thank you.

On this fifty-fourth day, then, we begin 2 Corinthians. And the first three chapters are a whirlwind. It’s almost like we catch Paul in the middle of a long conversation with the Corinthian believers. He wasted little time getting to the hurt he felt from the punch.

Do you think I talk out of both sides of my mouth—a glib “yes” one moment, a glib “no” the next? Well, you’re wrong. I try to be as true to my word as God is to his. Our word to you wasn’t a careless yes canceled by an indifferent no. How could it be? When Silas and Timothy and I proclaimed the Son of God among you, did you pick up on any yes-and-no, on-again, off-again waffling? Wasn’t it a clean, strong Yes? (2 Corinthians 1:17-19; The Message)

These are harsh words, from a man whose accustomed to writing harsh words.

Someone in the Corinthian community of believers had leveled some harsh accusations against Paul. Working back from passages like this, and others, it’s clear that Paul’s integrity was under fire. Remarks were made by one person, which caused several in their community to doubt Paul’s truthfulness. Much of what he wrote, in this letter, was his defense. He was not who some claimed him to be. Thus, the passage above, in the first few sentences of this letter, he was fairly plain. He was a man of integrity, and he was a man who could be trusted.

And his entire defense rests on this passage:

It is God who enables us, along with you, to stand firm for Christ. He has commissioned us, and he has identified us as his own by placing the Holy Spirit in our hearts as the first installment that guarantees everything he has promised us. (2 Corinthians 1:21, 22; NLT)

He was filled with God’s spirit.

And everything else was irrelevant.

He did not preach the redemptive message for personal gain (2:17), though, but there seemed to be many who did. The message of redemption Paul preached was life-giving, not life-draining. Whomever else came to Corinth, and used the message of grace for personal profit, was, in fact, doing just the opposite. He called them street-peddlers (2:16), and whatever they did, they made sure they were paid handsomely, using the grace of God only to better their own lives, and fill their own pockets.

Here is the cornerstone of the message he gave to the Corinthians:

He has made us competent as ministers of a new covenant —not of the letter but of the Spirit; for the letter kills, but the Spirit gives life. (2 Corinthians 2:6; NIV84)

My fresh reading of the New Testament these ninety days has exposed what Francis Chan calls the “forgotten God.” It’s here, again, today, and it flew from the pages of my bible.

God’s spirit is both our organic, and our divine connection to God. It is the very essence of God in our lives. So much of Jesus’ promise, to send this spirit, is fulfilled through these pages, yet so much we blatantly ignore.

Think about this: had Paul defended himself, before this community, by his own merit, he would have failed.

Because the spirit of God is the deposit, in our lives, of a greater glory God holds for us. It gives us life. It’s ministry, in our lives, is greater than any religion. It is God himself. And it gives freedom to us.

Wow. That is life-shaking today. 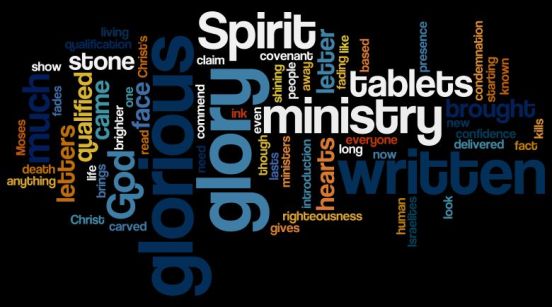